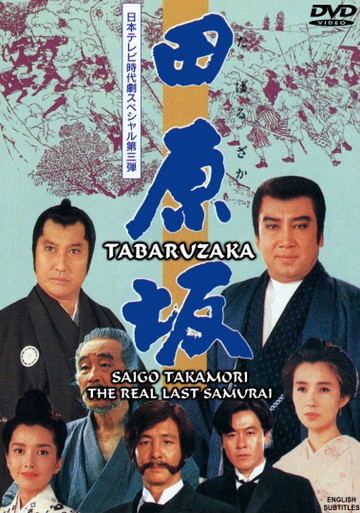 and YOROZUYA Kinnosuke as KATSU Kaishu

Known as the ”Last Samurai” Saigo Takamori was a stout giant of a man with a huge head and a neck like a bear. As the leader of Satsuma’s anti-Western faction, he was instumental in establishing the Sat-Cho Alliance dreamed of by Sakamoto Ryoma. After the fall of the Tokugawa, Saigo rose to major prominence before falling in disfavor. Wearing swords was forbidden in 1876 with the exception of ceremonial events. Overall that was a reasonable and appropriate decision. But it upset a majority of the samurai, especially Saigo. In 1876 Saigo Takamori resigned from his government post and went back to Kagoshima. He founded a local military school and dissatisfied samurai gathered around him in large numbers. The central government watched the open build-up of a regional, political and military force in Satsuma with great concern. In late 1876 it came to an open conflict when samurai rebels raided and occupied ammunition and weapon depots of the central government. The samurai rebels urged and proclaimed Saigo Takamori as their leader. While the Tom Cruise movie fictionalized Saigo’s life story, this is history come to life in the most exciting rendition with an all-star cast that is not to be missed!