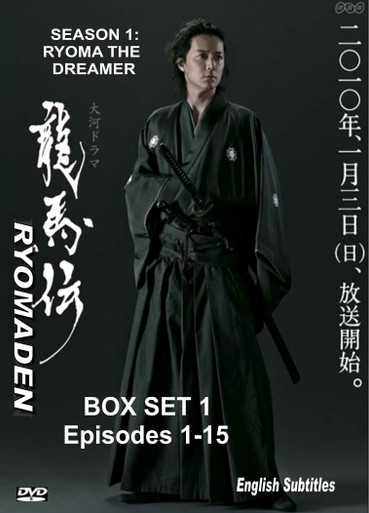 RYOMADEN – THE STORY OF SAKAMOTO RYOMA

1880's Meiji Japan. It is almost twenty years since the end of the Samurai Era in Japan, one time Tosa Clansman, successful business industrialist, mogul, & founder of Mitsubishi Corporation Iwasaki Yataro (played by Teruyuki Kagawa) is approached by a reporter to recount what he knew of the life of the Tosa Clansman, visionary reformer, & architect of Modern Japan, Sakamoto Ryoma (played by Masaharu Fukuyama). Almost instantly Iwasaki is incensed and overcome by rage & jealousy for throughout his life he had lived in the shadow of his famous beloved clansman. Upon reason, Iwasaki agrees to conduct the interview on the grounds that his recollection would not serve to glorify the memory of Sakamato Ryoma. His memories are painful and numerous which becomes the basis of this 2010 49th NHK Taiga Drama that will go back to the Pre-Bakumatsu period where Iwasaki first encounters a lanky young Kashii named Sakamoto Ryoma - a member of the Lower Caste Samurai of Tosa so named because they were once the rulers of Tosa but fought on the losing side of the Battle of Sekigahara by which the victor Tokugawa Ieyasu punished the Samurai of Tosa to elevating those who sided with him to Joshii (Upper Samurai) and those who lost to Kashii Samurai who must endure the cruel taunts and indignity at the hands of the Joshii. But for Iwasaki his status is even lower for his family had sold their Samurai status to pay off debts. From the moment they met Iwasaki envied the likeable Sakamoto and would grow to ever resent him and his long ascension to success and as a Reformer who through the mentor-ship of Katsu Kaishu (played by Tetsuya Takeda)- a man Ryoma was sent to assassinate but instead became his disciple. Now threatened by the arrival of the American Black Ships, Kaishu would instill upon Ryoma a grander world view that would shape Ryoma to go on to help unify the rival Choshu & Satsuma clans to form an alliance and lay out the plans for a modern post Shogunate Japan. In recounting the story Iwasaki must confront his own deep personal feelings bitterness and spiteful envy to a man who despite Iwasaki's massive wealth in the Post Samurai New Meiji Era is still haunted by a man who long been assassinated and was still beloved by the people of Japan.