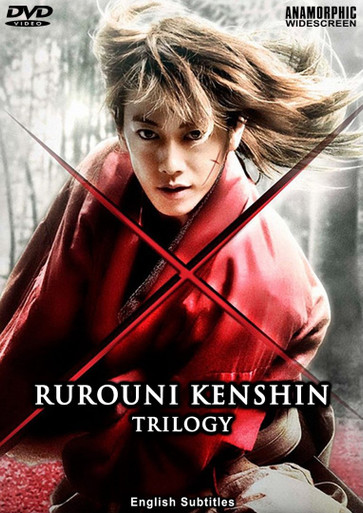 Based loosely on the real-life assassin Kawakami Gensai (one of the 4 ”Hitokiri of Kyoto”) this movie series broke all box office records in Japan and has ignited a worldwide following. Growing from manga through anime, the story of Himura Kenshin evolved into three live action films that bring the story to life. Having sworn off killing 10 years earlier and now a ”Rurouni” (wanderer), Kenshin has replaced his sword with a back-blade weapon, the cutting edge is where the blunt side used to be and the cutting edge is now blunt. He cannot kill with this sword, but it can be used to protect those close to him. Director Otomo Keishi offers an action-packed trilogy on the story of Kenshin available with English subtitles for the first time!

Former legendary assassin Himura Kenshin (Sato Takeru) has now become a wandering samurai. Offering aid & protecting those in need as atonement for his past deeds. During this time Himura Kenshin comes across and aides Kamiya Kaoru (Takei Emi). Her father opened the Kamiya Kasshin-ryu, a kendo school located in Tokyo and Kaoru is now an instructor there. Kaoru then invites Kenshin to stay at her dojo. Their relationship develops further, but Kenshin is still haunted by his violent past...

Former assassin Battosai, now living quietly as Himura Kenshin has settled into his new life with Kaoru and his other friends when he is approached with a request from the Meiji government. Shishio Makoto, a former assassin like Kenshin, was betrayed by the army, set on fire, and left for dead. He survived, and is now in Kyoto, plotting with his gathered warriors to overthrow the new government. Home Minister Okubo Toshimichi, one of the founders of modern Japan personally asks for Kenshin’s help as he is the only person capable of defeating Shishio. The forces previously sent by the government have perished and the entire nation is in danger of collapse. Picking up the sword he vowed never to use again, and against Kaoru's wishes, Kenshin reluctantly agrees to go to Kyoto and help keep his country from falling back into civil war.

The only hope for Japan’s survival rests with the former official ”Shadow Assassin” Himura Kenshin, known in the past as ”Battosai.” His replacemant in that post Shishio Makoto who had been betrayed by the Meiji government and has journeyed to Tokyo where he plans to topple the current regime and bring Japan into chaos. Kenshin, who swore never to kill again is the only thing that stands between redemption and total destruction, but are his skills good enough to succeed? He must learn a devastating new technique from his original sword master!This is the third and final entry in the action-packed series that has taken Japan and the world by storm!