RONIN IN A LAWLESS TOWN Volume 4 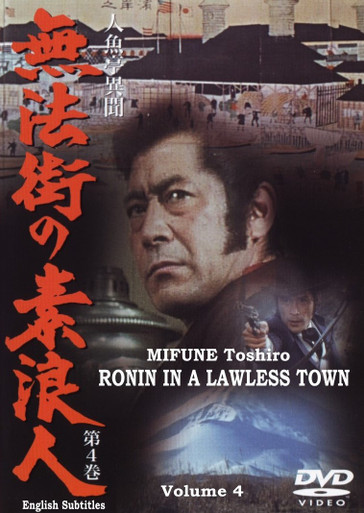 RONIN IN A LAWLESS TOWN Volume 4

INSIDE STORIES OF THE MERMAID SALOON

RONIN IN A LAWLESS TOWN

Episode 10: The Song Of A Lone Wolf

The final two episodes of season one of this higly entertaining and enlightening series about the earliest days of the Meiji era.  As Yokohama grows, so do the problems around any international seaport, with a few more issues unique to Japan. While the samurai era has passed, there are still some men carrying on the tradition, most notably the ronin called Mr. no Danna (literally Mister Mister), played to the hilt by Mifune Toshiro. In tandem with Chidori Gennosuke, a spy for the new government they first must help a former yakuza with his plan to build Japan’s first department store. Unfortunately, there are gangsters trying to take over the area where the market would be, and they have their sites set on the crown jewel of Yokohama, The Mermaid Saloon. Following that a young couple who have eloped and run to Yokohama to find work turn out to have the key to a conspiracy to overthrow the new government while also trying to start a business as the first ice cream stand in Japan. With Chidori’s cover blown and a pair of killer priests looking for blood danger looms large.