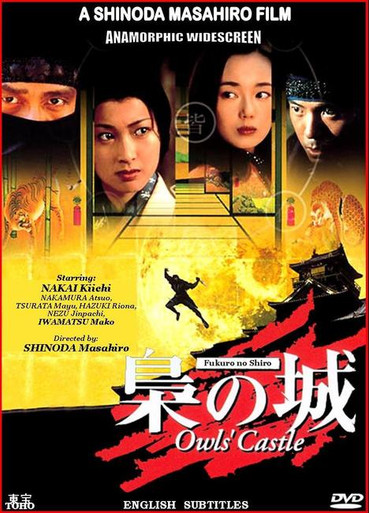 Stunning remake of the 1963 classic tale based on the novel by Shiba Ryotaro.  Far superior in every way, this is a true masterpiece from one of Japan's greatest filmmakers.

Famed director Shinoda Masahiro (SAMURAI SPY, DOUBLE SUICIDE) reached the zenith of his career with this remarkable remake of the old Toei Ninja film from the 1960's, "The Castle of Owls". After Oda Nobunaga has destroyed the Ninja of Iga, and Toyotomi Hideyoshi has taken over as the most powerful man in all Japan, the last remaining survivors of Iga are hired to assassinate Hideyoshi, (played by Mako, in his best role since THE SAND PEBBLES). One of the most stunning visual works of art ever created for the motion picture screen, this is a true masterpiece! Shinoda reaches new heights of brilliance having co-written the screenplay from a novel by Shiba Ryotaro. Can these stealthy warriors carry out the impossible mission and reach Hideyoshi, tucked away safely in his fortified castle?