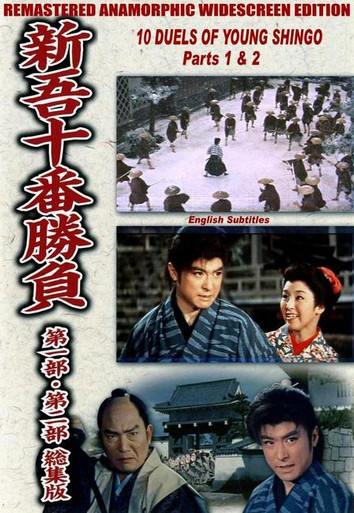 (Shingo Juban Shobu Dai Ichibu-Dan Nibu)1959 - color - 103 min. REMASTERED Anamorphic Widescreen (16:9)
This is the original Toei film, not the made for television trilogy.Starring: OKAWA Hashizo               OTOMO RyutaroDirected by: MATSUDA Sadatsugu & OZAWA Shigehiro
These are the first two movies of the popular series in which young samurai Aoi Shingo (Okawa Hashizo) learns that he is in fact, the illegitimate son of Shogun Yoshimune.  Hoping to reunite with his birth father he heads for Edo Castle.  However, the reunion never takes place as Shingo finds himself the target of a conspiracy.  Will he ever be able to meet his father?  This exciting series in one of the great classics from Toei Films, and rocketed Okawa to stardom.  These two films are presented as one film which opens the series introducing the violent, yet soulful journey of young Shingo.