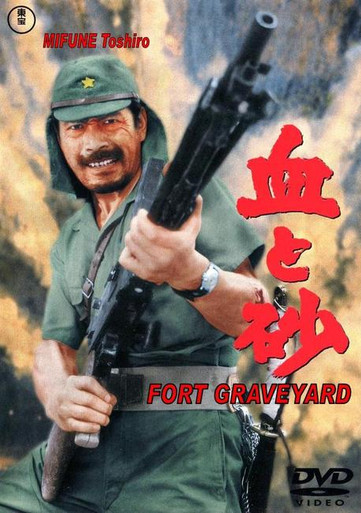 Combining the talents of Mifune Toshiro, Nakadai Tatsuya, and master filmmaker Okamoto Kihachi, this is possibly the greatest war film to come out of Japan.  Mifune plays Sergeant Kosugi, who, although decorated for valor has been sent to the Manchurian front after striking a superior officer.  On his way to the fort, he falls in with a military band, none of whom have weapons, just their musical instruments, and it falls to him to make them into soldiers who must capture the strategic Fort Graveyard from the Chinese.  Nakadai is brilliant as Captain Sakuma, the commanding officer who sends Kosugi and his squad on this suicidal mission.  Brutal action and macabre humor combine to make this film an outstanding anti-war statement.  Although best known in the West for his samurai films ”Samurai Assassin” and ”Sword of Doom”, Okamoto is considered one of Japan’s greatest directors and this is a true masterpiece.  As with ”Desperado Outpost”, this movie is set during the waning days of the Second World War in Manchuria where the tide has turned against the Japanese army and life is cheap.