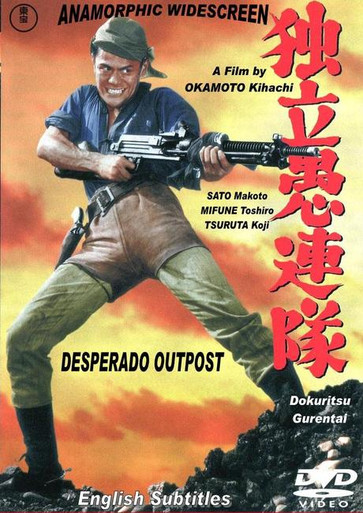 Things are not what they seem, when a roving newspaper reporter arrives in Manchuria near the end of the Second World War.  The war is not going well for Japan, and as they draw back their battlelines, one outpost is left to bear the brunt of the Chinese army's onslaught.  Known as the "Desperado Outpost" it is made up of the Japanese military's dregs, good-for-nothings who are covering up a brutal crime committed on base that could wreck the careers of the officers in charge.  This is the second movie directed by filmmaker Okamoto Kihachi and his first certified masterpiece.  A mixture of action, drama, macabre humor, and veiled mystery combine to tell a story that is unlike anything seen before.  Legendary superstars Mifune Toshiro and Tsuruta Koji make brief, but critical appearances, while Sato Makoto gives a brilliant performance as the newsman who may be more than he seems.