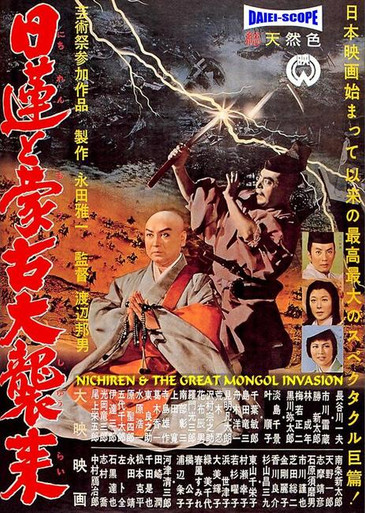 NICHIREN AND THE GREAT MONGOL INVASION(Nichiren to Moko Daishurai)1958 - color -  Daiei Films - 138 min. - REMASTERED Anamorphic Widescreen (16:9)Starring: HASEGAWA Kazuo, ICHIKAWA Raizo, KATSU ShintaroDirected by: WATANABE Kunio
As Japan prepares to face the greatest crisis in that country’s glorious history, a solitary Monk named Nichiren proposes a theory that, while it goes against commonly held beliefs of the time,   still offers a possible solution.  His firm belief in the teachings of the “Lotus Sutra” lead first to grave problems, including attempts on his life, and exile to a penal colony on Sado Island; a place from which nobody has ever returned.How Nichiren overcame these obstacles to lead Japan in prayer as the Mongol fleet approached is one of the great stories from Japanese history, and must be seen to be believed.  Never before, and never since, has a motion picture told the story of how the Japanese battled on the beaches, while the Gods themselves massed their great Typhoon, called “Kamikaze” to defeat Kublai Khan’s overwhelming hordes!