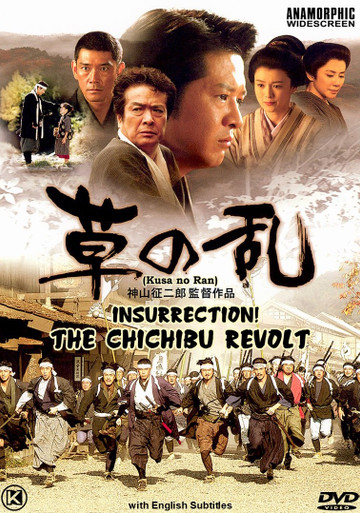 and ISHIBASHI Renji as NAKAOKA Shintaro

SPECIAL PRE-ORDER WITH FREE SHIPPING IN THE US ONLY!

Inoue Denzo, a humble town official, only wanted a better life for the hard-working men of his community. Farmers all over Japan were squeezed mercilessly, by the government’s taxes, the corrupt justice system, and the crooked lenders who ran up the interest on their loans. Loans offered at unreasonable rates to common folk desperate to keep their farms going for one more season. In November of 1884, local leaders of the liberal party, fighters for democracy, could take no more. The farmers’ rebellion of that year, called by history The Chichibu Incident, saw great masses of common folk take arms against the government of Japan. Denzo would join the cause and witness the terrible consequences for the men who fought alongside him. The bloody struggle that followed still echoes through the years…