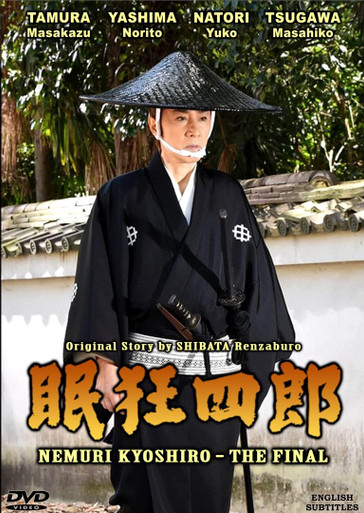 and TSUGAWA Masahiko as MATSUDAIRA Mondonosho

The grand finale of the epic story of Nemuri Kyoshiro, the legendary ”Son of the Black Mass” whose peerless Full Moon Sword Style may have finally met its match. Seeking to avenge the death of his foster father, Kyoshiro returns to Edo at a time when the city is overrun with former samurai forced to become paid assassins, while a conspiracy to oust the shogun and reform the government is taking place. Into this steps a young woman claiming to be Kyoshiro’s daughter! Highlighted by flashbacks to his youth which explains the true background of this magnificent swordsman, whose secret past could change the course of history! Can Kyoshiro survive this most dangerous time and go on to live out his final days in peace or will he succumb to the adage ”He who lives by the sword, dies by the sword?”