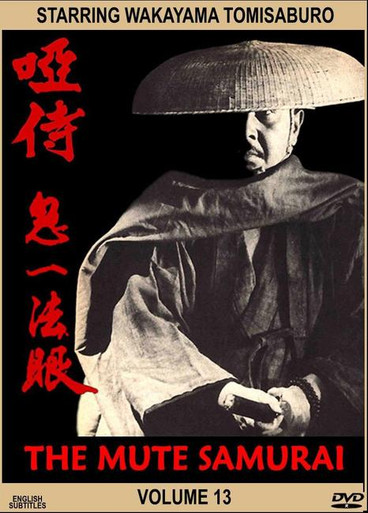 ”A Man To Man Promise”

Mute Samurai Kiichi Hogan’s hope to avenge the murders of his father and mother appear within reach as he is able to find a Spanish sea captain willing to smuggle him out of Japan on the next ship to Spain for a fee of one thousand gold coins.  With time running out, he is short by only 200 ryo but must contend with a plot against his benefactor Tokaiya Shinbei, the merchant who arranged his passage on the ship.  Will he be able to make the final payment and catch the ship before it sails, or will the forces of fate and destiny line up against him and deny him the one opportunity to carry out his vendetta against the brutal slaughter that has haunted him all these years?

He is neither alive nor dead.  Cutting off all tender human feelings, burning with his one desire for revenge while keeping his personal misfortune deep within his heart, Mute Samurai Kiichi Hogan has pressed on for the past 18 years seeking vengeance against the Spaniard who murdered his parents and cut his throat thus robbing him of his voice forever. Will destiny finally reward him with the chance to carry out his vendetta and end this painful quest for good?  Meanwhile, his younger brother Lord Sagara, the ‘Foreigner Magistrate’ has risen in the government to a position of power that may be endangered by the vendetta against Gonzales, who is now a high ranking Spanish official and a favorite of that nation’s Queen.  The tension mounts to a fever pitch as the forces of destiny finally present the ‘Mute Samurai’ with a chance to meet his mortal enemy face to face or will he cause an international incident that could cause war between the two nations?