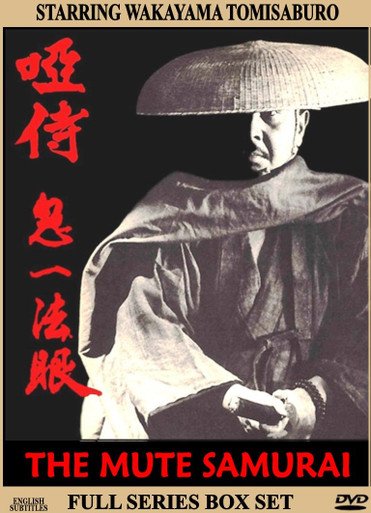 All 26 episodes of the most brilliant series ever to hit television in a convenient boxed set.

The top professionals in the field of Jidai-geki films created this unique series.

In the 1970’s Japanese television was ready for a change. No longer were the simple stories of the past sufficient. Bloodthirsty and violent films were showing in theaters, most notably the “Lone Wolf and Child” series. After those six films, the brilliant creative team of Producer/Actor: Katsu Shintaro, Star: Wakayama Tomisaburo joined with one of the greatest of all filmmakers, Gosha Hideo to take a series of Gosha’s stories and bring them to the small screen. These three top names in Samurai cinema formed a team the likes of which had never been seen before.

Utilizing many of the top Samurai film directors, including Misumi Kenji, Yasuda Kimiyoshi, Mori Kazuo, Kuroda Yoshuyuki, and others, these shows were created with production values that rivaled those of feature films. The series starred Wakayama Tomisaburo in the lead role with special appearances by Katsu Shintaro and guest stars that included: Narita Mikio, Hama Yuko, Taichi Kiwako, Kayo Matsuo, Nakamura Tamao, Nishimura Ko, and Judy Ongg as well as most of the same swordfighting actors from the Zato Ichi and Lone Wolf films.

The original story by Gosha was set in the early Tenpo Period and told of a swordsman and his son cut down by a foreigner who was an expert in European swordplay. In addition, the foreigner cut the throat of the slain samurai’s young son, thus robbing him of his voice forever. After this incident, the young man studied the Ten-ryu style of swordsmanship, renamed himself ‘Kiichi Hogan’ (Demon Magistrate or Magistrate with a Grudge) and became a bounty hunter.

The story was changed a little for television, and the final version has Mute Samurai, Kiichi Hogan working as a bounty hunter trying to raise money for a trip to Spain so he can hunt down his father’s killer, Gonzales, the Spaniard skilled in swordsmanship.

Being a mute, the Silent Samurai must find other ways to communicate his powerful motive for revenge, as he hunts down wanted criminals and helps the weak and oppressed at the same time. His adventures take him to the highest mountains to the very depths of Hell and wind up at the famous Kane-jiTemple for a duel unlike any other.

The elder brother of Katsu Shintaro, and perhaps the strongest swordsman in the history of Japanese films, Wakayama Tomisaburo is best known internationally for his definitive portrayal of Ogami Itto (Lone Wolf, Assassin With Child) in the Baby Cart film series. In addition, he also starred in many other films and TV series, always showing his amazing prowess with weaponry. Never using doubles for his stunts or swordplay, he has risked life and limb to create some of the most memorable moments in the world of the Samurai Film. No other film star could match his ‘Iaido’ (Quick Draw Sword technique), or his ability to spin spears and staffs as he cut down scores of foes. In his final years at Toei Films, Wakayama starred in 2 unique series, in the first he played Shinkai, the Wicked Priest, a wandering Buddhist Priest who engages in all things forbidden, including drinking, gambling, and fighting. In the other series he starred in at the time, KILLER’S MISSION, Wakayama played Shikoro Ichibei, a professional assassin with a wide array of weapons who answers only to the Shogun. Of even more interest, after the Lone Wolf series ended, three of the greatest names in Japanese film, Wakayama Tomisaburo, his brother Katsu Shintaro, and the noted director Gosha Hideo, collaborated to create THE SILENT SAMURAI a television series unlike anything before, featuring violence and swordplay that far surpassed any previously shown on the small screen.