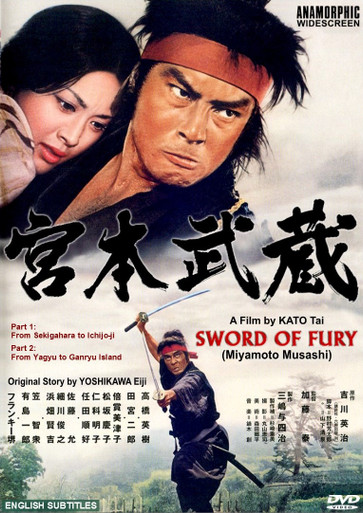 and Frankie SAKAI as Matahachi

This is the most realistic portrayal of Miyamoto Musashi that has ever been filmed. Although it is also based on Yoshikawa Eiji's novel which inspired most of the film versions of his life story, this movie shows the brutal nature of the man in his quest for fame. Starring the great Takahashi Hideki, one of the best swordsmen to ever grace the silver screen, Musashi's career highlights are all shown from his survival at the Battle of Sekigahara, through his challenges of  the Yoshioka Sword School, instructors to the shogun, and on to the final duel with Sasaki Kojiro to determine who is Japan's finest swordsman. Never before has there been a film about Japan's most famous samurai that approaches the power seen here.