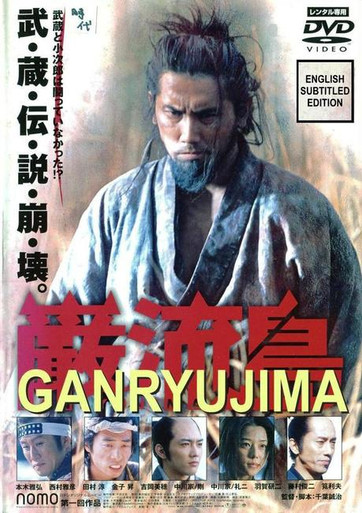 GANRYUJIMA - THE STORY OF MUSASHI VS. KOJIRO

The movie that turns the legend of Miyamoto Musashi upside down!

Miyamoto Musashi’s most famous duel was in 1612 when he faced the brilliant swordsman Sasaki Kojiro on an uninhabited island, then known as Funajima.  While all of his other matches are recorded in history, even Musashi himself made no mention of it in his famous “Book of 5 Rings,” which he wrote just before he died.  This movie clears up the mystery of why Japan’s greatest fencer kept silent on the subject.

The legendary duel between Miyamoto Musashi and Sasaki Kojiro on Ganryu Island is brought to life in a way never before seen.  The vile Musashi has raped a farm girl and commandeered a boat for his trip to the island for the fateful match.

He is little prepared for what comes next.  Meanwhile, as Kojiro awaits him on the island, a plan by the Hosokawa clan to rid themselves of the Sasaki family threatens Kojiro’s life!