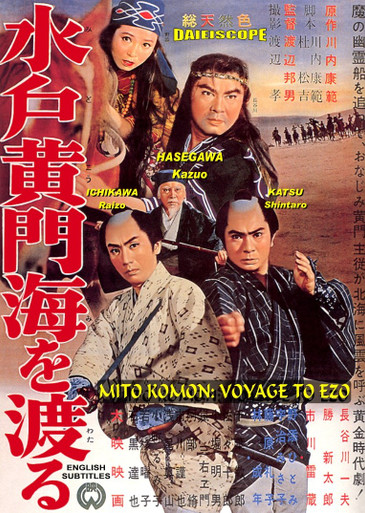 Daiei Film Company's three biggest stars shine in this exciting story about Vice-Shogun Mito Komon's journey to the land of the Ainu. As the shogun's uncle, Lord Mito traveled about the nation seeking to make sure that corruption and injustice did not go unpunished. Traveling together with his two faithful bodyguards Kaku and Suke, they board ship for a voyage to the far northern island of Ezo (modern day Hokkaido) where the indigenous people called "Ainu" live. Somewhat like American Indians, the Ainu had their own culture which had not been subjugated by the Matsumae clan, rulers of the vast island. A revolt is brewing within the leadership of the Ainu, which threatens to destroy their peaceful lives. The elder lord and his retinue are the only ones who can stop this reign of terror!