MISUMI Kenji's I WANT TO DIE A SAMURAI 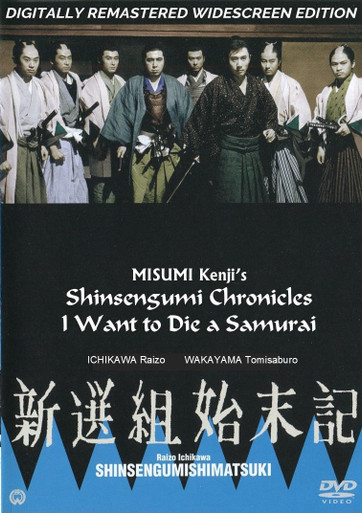 MISUMI Kenji's I WANT TO DIE A SAMURAI

I WANT TO DIE A SAMURAI - A CHRONICLE OF THE SHINSENGUMI

and WAKAYAMA Tomisaburo as KONDO Isami

SPECIAL CLOSE OUT SALE WITH FREE SHIPPING IN THE US ONLY!

This film was based on a story written by Shimozawa Kan (creator of the Zato Ichi character), which he researched by interviewing surviving family members of the Shinsengumi, the Para-military police force made up of ronin under the leadership of Kondo Isami. The central character, however, was a spy for the organization Yamazaki Susumu, and it gives a realistic view of this infamous group who many credit with saving the emperor’s life during the incident at Ikedaya in Kyoto. Although he was not originally cast in this film, Raizo asked to be included and insisted that it not be a star vehicle. He wanted to keep the movie as close to recorded history as possible. Daiei Film Co. complied and this superb work by master filmmaker Misumi Kenji is truly Japanese history come to life!