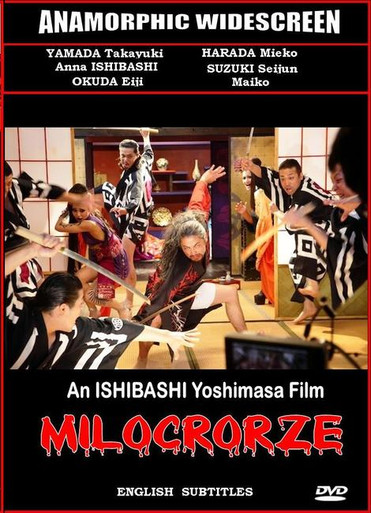 Milocroze is an anthology piece, four stories about manly romantic angst with the first and last revolving around the titular Milocrorze - a rather fetching young lady - and the boy who falls in love with her at age seven and pines for her his entire life. Between the Milocrorze bookends we get the story of a leisure suited relationship counselor with a yakuza snarl who offers advice only to teenaged boys and the story of a salaryman who turns roaming samurai to find the lover who was taken from him. Miike Takashi’s Thirteen Assassins star Yamada Takayuki takes the lead in three of the stories, absent only from the opener where his later character is played by a young child.

The mid-section of Milocrorze is where the strength lies. Narrative connections between the film as a whole are tenuous at best but the middle two pieces - the relationship counselor and the wandering samurai - are both pretty astounding as stand-alone pieces. Had either been presented as a short film rather than part of a larger whole both would have been raved about as some of the finest work of the year.