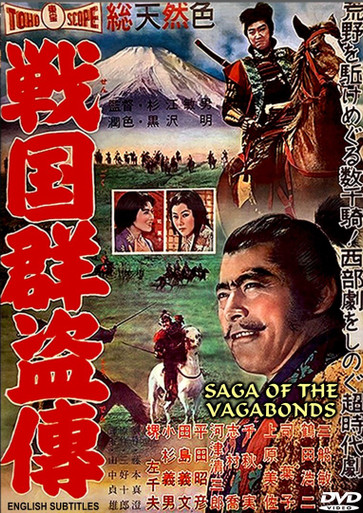 SAGA OF THE VAGABONDS

and SHIMURA Takashi as Lord TOKI

From the pen of legendary filmmaker Kurosawa Akira, comes this tale of villainy and honor set during the Warring States era. Japan’s greatest actor stars as Rokuro, a feudal bandit, who robs the procession carrying money that was meant to be used against his gang of brigands. Toki Taro (Tsuruta Koji), the noble samurai who was entrusted with the money, is falsely accused of stealing the money himself and vows to avenge his good name. Joining with the bandits they storm the family castle to wreak vengeance against those who had betrayed him and set out to help the downtrodden farmers who had been taken advantage of by the ruthless samurai elite.