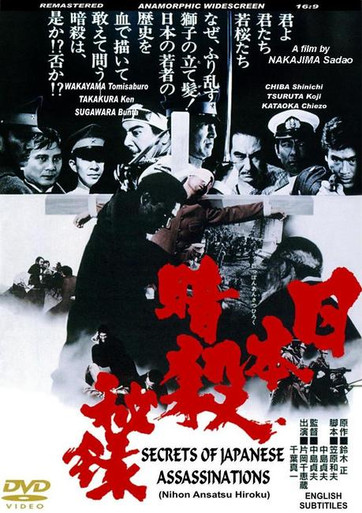 Detailed descriptions of 9 bloody assassinations that changed the course of Japanese history!

Featuring all the major stars from Toei Studios in the late 1960's, this true tale taken from the prison writings of convicted assassins is one of the most important and awe inspiring films that has ever been made!

This anthology film consists of nine incidents in the late 19th and early 20th centuries when assassins changed the course of Japanese history. Among them are the Sakurada Gate Incident that occurred in 1860 (Assassination of Ii Naosuke) and the February 26th Incident of 1936, when a group of Japanese Army troops attempted a coup d’état. The vignettes are all played out in ultra-violent form by a large number of Japan’s major stars, including Wakayama Tomisaburo, Sugawara Bunta, Tsuruta Koji, Takakura Ken, Chiba Shinichi, and Kataoka Chiezo. The main bulk of this film concerns the ”League of Blood” a group led by radical priest Inoue Nissho (Kataoka) who takes a troubled young man (Chiba in by far his greatest performance as an actor) under his wing, leading to a pair of assassinations that helped change Japan from a burgeoning democracy into the militaristic juggernaut that they become in the mid-20th century.