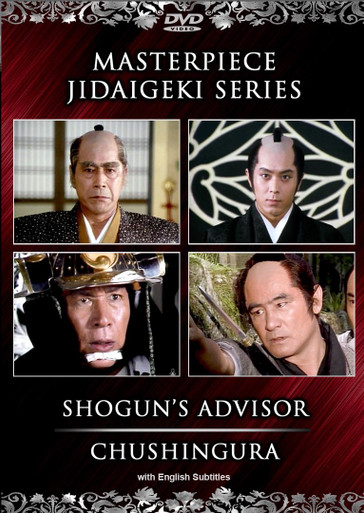 Japan's greatest jidaigeki star, Mifune Toshiro is Shogun's Advisor Okubo Hikozaemon who must be coaxed out of retirement to save Shogun Iemitsu from danger. The elderly Hikozaemon has been belittled of late and has seemingly lost the will to live, much less the desire to assert himself and make Iemitsu listen to reason. The plot thickens when a lovely young woman enters the picture. Can she change Hikozaemon's mind, and thus alter the path of Japanese history? No longer a young man, can Hikozaemon gain the shogun's ear, and succeed in warning him of the evil plot to overthrow him?

Tanba Tetsuro is Oishi Kuranosuke, Chief Retainer of the now disbanded Ako Clan and the leader of the planned vendetta against the vile Lord Kira. In order to carry out the plan, Oishi has to send the '48th Ronin', Mori Koheita, a lowly vassal undercover to try and see Kira's face so they can identify him, and not kill a double. This highly dangerous job places the Koheita in a virtual living hell. He must make it seem he was a coward in order to attain his goal, and yet stay alive to lead a second attack should the first one fail.