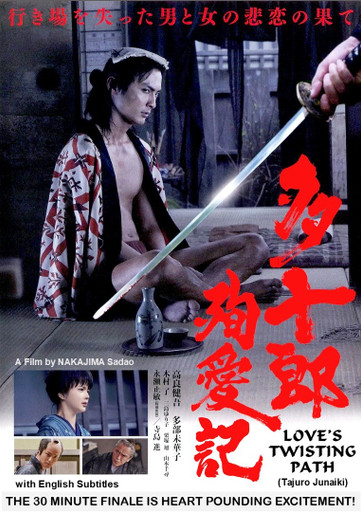 Written and Directed by: NAKAJIMA Sadao

DEDICATED TO THE SPIRIT OF LEGENDARY DIRECTOR ITO DAISUKE!

Master filmmaker Nakajima Sadao’s return is a resounding success. Love’s Twisting Path tells the story of a former samurai living a peaceful life drawn into action against his will. Kiyokawa Tajuro, formerly the Choshu clan’s finest swordsman, now acting as bodyguard for a Kyoto tavern owned by a woman with a secret crush on him is thrown into a maelstrom of violence when his brother comes to Kyoto seeking his help in overthrowing the Tokugawa shogunate. The most exciting swordplay in film since the 1970’s highlights this movie along with the human drama that only a master like Nakajima can bring to the silver screen. On a par with his contemporaries, such as Gosha, Misumi, and Kurosawa, this is a true masterpiece of samurai cinema!