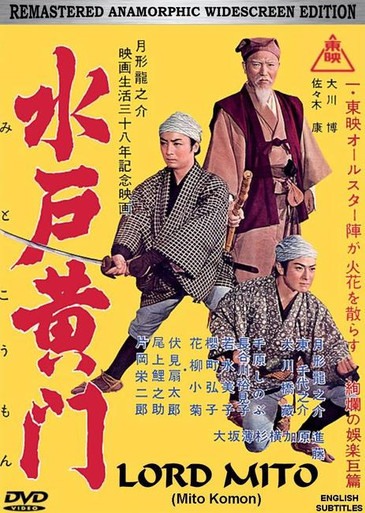 SPECIAL SALE AT A 25% DISCOUNT

This most celebrated all-star movie version of the popular series features Tsukigata Ryunosuke as Mito Komon, the sage who wanders the countryside rectifying government corruption along with his faithful attendants Suke-san and Kaku-san.

Based on the life of historical character Tokugawa Mitsukuni, the shogun's uncle, who nonetheless finds that his nephew Ietsune has lost his perspective, and values the lives of animals above that of people. After interceding on the matter of ”honorable dogs” the elder is approached for help by one of Japan’s premier swordsman in proving the innocence of his clan’s chief councilor.  A faction within the clan is trying to take over from the rightful lord.  Can the elder find the evidence needed to stop these villains from succeeding in their plot?