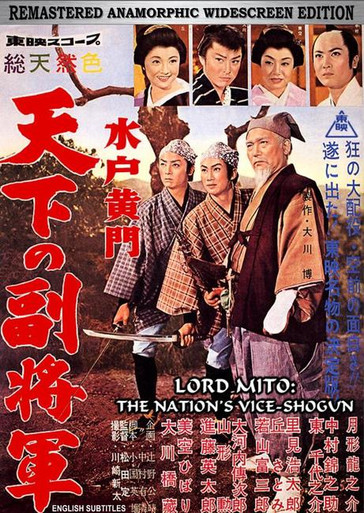 SPECIAL SALE AT A 25% DISCOUNT

After settling the matter of shogunal succession, the retired Old Lord of Mito finds himself in a sea of trouble when he gets involved in the succession of the Takamatsu clan. The usurpers try by every means to effect their takeover, even if it leads to blood being spilled.  Along with Kaku and Suke, the elder must face the most dangerous time of his life, in a battle against those corrupt individuals who would use any means to further their dastardly conspiracy, regardless of how many lives might be destroyed.  The great Misora Hibari gives a bravura performance, as does the rest of this all-star cast.  This is another outstanding effort on the part of the Toei Films, blending fact and fiction to bright back Japan’s golden era of the Genroku period. Included are 4 songs with English Subtitles!