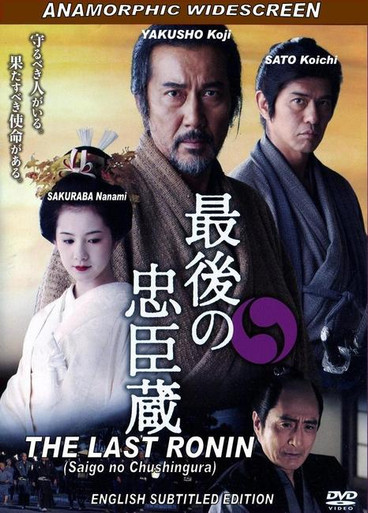 THE LAST RONIN (Saigo no Chushingura)

IN STOCK READY FOR IMMEDIATE SHIPMENT

The brilliantly told tale of the last survivor of Ako's vendetta and his chance meeting with a former comrade who disappeared the night before the attack.  Loaded with suspense and mystery.  This is a great motion picture!

Set sixteen years after they carried out the vendetta against Lord Kira, this film tells the story of the sole survivor of the Ako Clan’s 47 Ronin as he searches the country for surviving family members in order to tell them what truly happened. When he meets up with a former vassal who disappeared the night before the attack, he seeks to find out why the man left.  This brilliantly told tale brings the story of the Chushingura to a fitting conclusion.  This is a drama of the highest level as tension rises while two former comrades move on with their lives in ways that neither can understand. This is the most critically acclaimed samurai film of recent years with marvelous performances by veteran actors Sato Koichi (son of legendary mega-star Mikuni Rentaro) and Yakusho Koji (star of Miike Takashi’s 13 Assassins), .