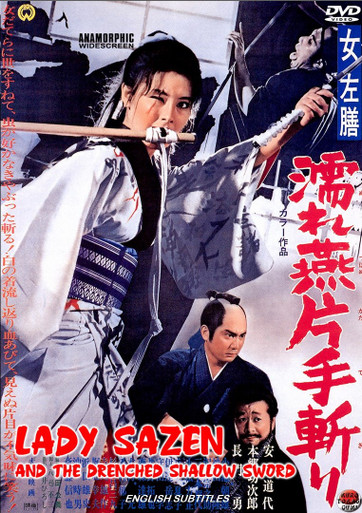 LADY SAZEN AND THE DRENCHED SWALLOW SWORD (aka LEFTY FENCER)

Tange Sazen, the one-armed one-eyed swordsman, one of most beloved characters in Japanese literature, has gotten a make-over. Meet O’Kin the one-armed one-eyed swordswoman, aka Lady Sazen. As a child, she was disfigured by Lord Daizen-dayu, who was after her family’s most treasured possession, the famed Drenched Swallow sword. As an adult, she has become a skilled swordswoman and lives a carefree life with her adopted family. One day, O’Kin saves a girl from a group of yakuza, and in doing so, gets involved in a grand conspiracy involving religious leaders, government officials, the yakuza and Lord Daizen-day, the man who killed her father and destroyed her body...