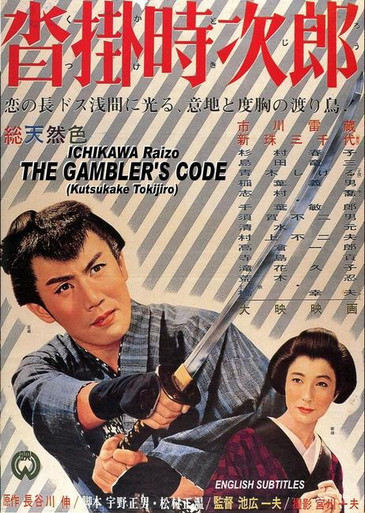 IN STOCK READY FOR SHIPPING

One of Japan’s most popular stories is the tale of Kutsukake Tokijiro, a traveling gambler who finds that he must take care of the wife and child of a yakuza he had been forced by the code of the gamblers to fight man to man.  In a brilliant performance from super-star Ichikawa Raizo, with strong support from two of the greats from Toho, Shimura Takashi (7 Samurai) and Aratama Michiyo (Sword of Doom) the heartfelt story reaches new heights. Tokijiro, having learned the true nature of the boss to whom he was obligated for having spent a night and eaten at the gang’s headquarters takes up arms against them in a running battle fought across the back roads of the entire nation. Another powerful rendition of this superb story, it is not to be missed!