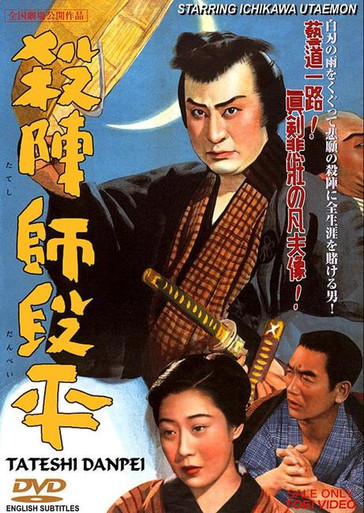 Written by Kurosawa Akira, this film tells the story of Swordplay Choreographer Ichikawa Danpei and his battle to keep the art of the samurai swordfight alive in Japanese entertainment. Coming out of kabuki, the traditional theater of Japan, Danpei had to change his style to fit the new realism that famed actor and troupe leader Sawada Shojiro required during the early 20th Century. Sawada was one of the great stars of Japanese theater and one of the earliest screen legends, being the first to portray many of the characters we have since come to be familiar with, such as Kunisada Chuji, Tsukue Ryunosuke, Kutsukake Tokijiro, and Tsukigata Hanpeita. The greatest actors of their generation star in this magnificent film, including Ichikawa Utaemon as Sawada Shojiro and Tsukigata Ryunosuke as Danpei. Filmed in glorious black and white, it paints a true  picture of "Shinkokugeki", the New National Theater of Japan!