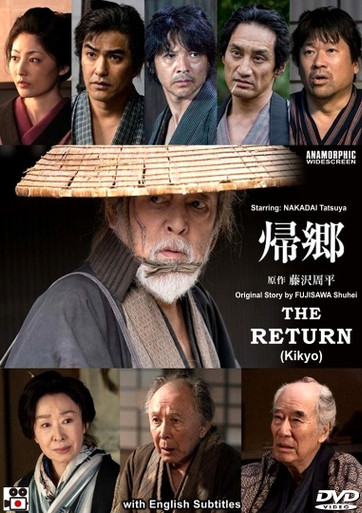 and NAKAMURA Atsuo as Kyuzo

Nakadai Tatsuya, the world’s greatest living actor, returns to the screen in a brilliant adaptation of a story by novelist Fujisawa Shuhei. A traveling gambler known as “Funeral Uno” he is now 86 years old and returning to his hometown for the first time in 30 years. Partly told in flashbacks, he is forced to face his lifelong nemesis, Boss Kyuzo, a vile yakuza portrayed by another superstar of samurai cinema, Nakamura Atsuo! Before the two old gamblers can settle a 30-year-old score they must put their lives on the line in a game of dice that can only lead to a bloody sword duel the likes of which has never before been seen!

Superb performances all around in a film loaded with surprises and exciting swordplay!

Comments on Kikyo: The Return by a noted video producer:

Well, I finally found the “perfect” time to finally view The Return and I was pleasantly surprised!  Since it was originally produced for Japanese television, I was stunned by the epic nature of the story, production values, cast and superb acting especially by Nakadai Tatsuya.  What a dazzling multi-faceted performance, portraying Unokichi, the troubled hero of the tale.  Running the emotional gamut, Nakadai feels remorse for the recklessness of his youth through repentance in his later years, as we are taken on a fascinating journey.  There’s action, sadness, even a little humor in this wonderful interpretation of another Fujisawa classic story.  Every once in a while we get to see a great “samurai” film and in my estimation this is one of the best.  By the way, I just received an email yesterday that you shipped the latest disc, so I’ve got another film to look forward to.  Hope you’re staying well and safe.