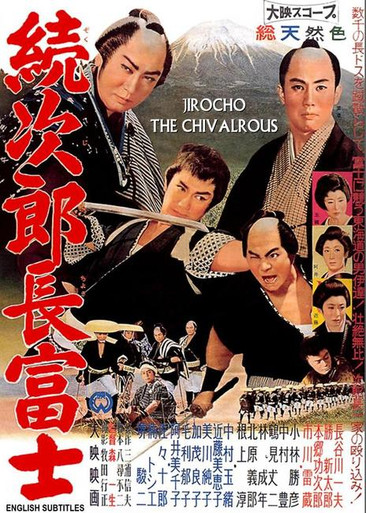 The exciting story of Jirocho and his yakuza gang that controlled the area of the Tokaido during the latter days of the samurai era.  Awesome fighting from Katsu Shintaro as One-Eyed Ishimatsu highlights this great tale taken from Japanese history!

The historical epic of gambler Jirocho of Shimizu, "Boss of the Tokaido" comes to an exciting conclusion as an all-star cast from Daiei is assembled to bring history to life against a backdrop of violence and betrayal. Drawn from the true adventures of the 'Shimizu 28', Jirocho and his men must bare their blades against throngs of vicious enemies who plot Jirocho's downfall as they try to take over the territory that he has staked out. This is a classic tale of true honor and swordsmanship that has reached legendary status in Japan. Can Jirocho and his men withstand the virtual army of opponents and take vengeance against thosewho sought his death? Featuring a bravura performance by Katsu Shintaro as the group’s best swordsman, Mori no Ishimatsu this is a brilliant swordfight film!