ISSHIN TASUKE - A WORLD IN CRISIS 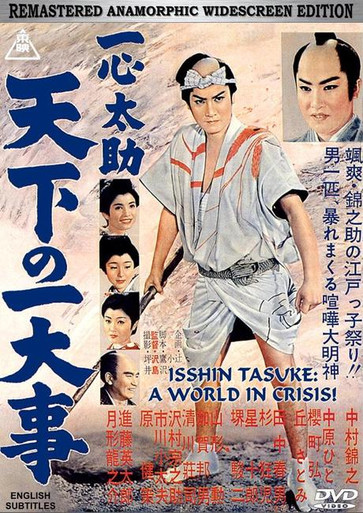 ISSHIN TASUKE - A WORLD IN CRISIS

ISSHIN TASUKE – A WORLD IN CRISIS

This is the second film in the Issin Tasuke series starring Nakamurai Kinnosuke in a dual role as fishmonger Tasuke and his exact double, Shogun Iemitsu. He has direct access to the highest level of government through his number 1 customer Okubo Hikozaemon, the shogun’s adviser. When Tasuke hears that his ”Boss” Hikozaemon has taken his friend’s fiancée as a concubine it leads to a foul conspiracy that pits the elderly hatamoto against his next door neighbor, the magistrate in charge of rebuilding Edo Castle. The usually cheerful Tasuke gets serious when forced to get to the bottom of the conspiracy.