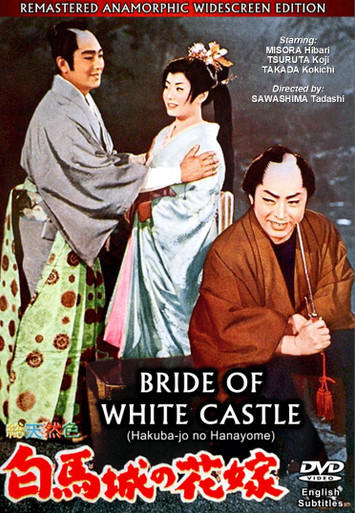 THE BRIDE OF WHITE CASTLE (Hakuba-jo no Hanayome)

The romantic Hakuba Castle is the catalyst for this tale of love and intrigue in old Japan. Growing up a poor orphan girl, Okimi the weaver has been dreaming of being swept off her feet by a knight on a white horse. Sometimes she hears a young lord and a princess whisper sweet words of love. While her dreams are only dreams, she does fall in love with a handsome thief disguised as a wealthy young lord, leading to complications in this highly entertaining story. She believes that her destiny is to marry the lord and become the 'Bride of White Castle'. Will it lead to joy or tragedy? Don't miss out on the exciting conclusion!
A sparkling performance by Japan's most popular female actress Misora Hibari makes this one of the most enjoyable of her many films.