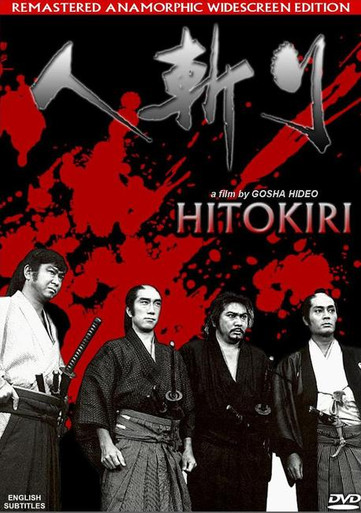 One of the most important and powerful films ever to come out of Japan, this is the story of Okada Izo and the Tosa Clan Loyalists who set out to restore the Emperor to power by assassinating their political opponents during the violent period near the end of the samurai era. With a performance for the ages, Katsu Shintaro shines in his greatest non-Zato Ichi role as a down on his luck swordsman who joins the Loyalist movement in 1862, rising to fame and fortune and then taking the ultimate fall from grace as those in power use and dispose of him like a rabid dog. Shouting “Heaven’s Punishment” with each assassination the Loyalists seek to overthrow the Shogun and turn the world upside down. With a brand new translation and a stunning anamorphic idescreen print, this is the ultimate edition of one of the great masterpieces of Japanese cinema. Startling performances from Nakadai Tatsuya, Ishihara Yujiro, and Mishima Yukio help bring history to life, while Katsu Shintaro shines as “Hitokiri” (Killer), the swordsman Okada Izo!

Noted reviewer of Japanese cinema Dave B. has this to say about the newly reduxed edition of Hitokiri:

*****
Hitokiri: An Action/Drama Masterpiece
Hitokiri is a perfect blend of action and drama and is one of the best films in Japanese cinema.  From those I've seen starring Katsu Shintaro, this is is best performance.  He plays a somewhat deranged and not particularly bright assassin who is used as a pawn by the Tosa clan's ruthless and evil leader, played by Nakadai Tatsuya.
The action scenes in Hitokiri are exceptional, realistic and brutal.  There are many of them dispersed throughout this 140 minute film.
All members of the cast play their parts very well but Katsu Shintaro's acting is superb and his performance easily surpasses all of the others, including Nakadai Tatsuya.
The combination of a great story, perfect acting and amazing fight scenes make Hitokiri one of the very best films to come out of Japan.  It is a true masterpiece that should not be missed!