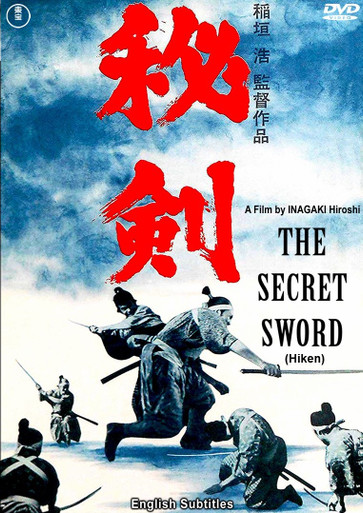 and TSUKIGATA Ryunosuke as MIYAMOTO Musashi

Inagaki Hiroshi is best known in the West for his Academy Award winning Samurai Trilogy, starring Mifune Toshiro. But one of his most artful films is practically unknown, “Hiken: The Secret Sword,” which long ago had a rarely shown 35 mm subtitled print available with the title “Young Swordsman.”  Remarkable swordplay choreographed by the great Kuze Ryu is at the very heart of this film. In black & white with the elegance of a Kurosawa Akira classic, The Secret Sword stars Ichikawa Somegoro as Hayakawa Tenzen the young swordsman possessed by his own evil sword style, and Nagato Hiroyuki is Chojuro the opponent who must learn to defeat evil. This theme is echoed in the classic Sword of Doom (1966) starring Nakadai Tatsuya as the swordsman who develops a deceptive sword style, and becomes himself deceitful, on the premise that the sword reflects the soul, and an evil sword style corrupts the soul. Kuze Ryu had also choreographed the swordfighting in Kurosawa's "Yojimbo" and "Sanjuro" as well as Okamoto's "Sword of Doom" and "Samurai Assassin."