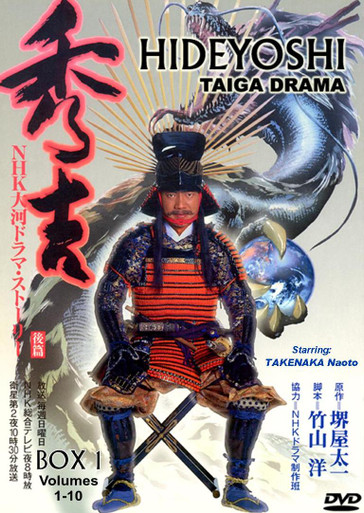 ALL 50 EPISODES HAVE ENGLISH SUBTITLES

One of the greatest 'rags-to-riches' stories in history comes to life in this yearlong Taiga Drama detailing the rise of Japan's most unique ruler. Starting in the late 1550's, Tokichiro, a low-rank young samurai joined the powers that ruled Owari, led by Oda Nobunaga. Despite his short stature and almost monkeylike appearance, this youth would go on to unite Japan under his banner and lead the nation towards an unprecedented era of peace under the future Shogunate rule that was to come after his death. As his station rose, Tokichiro went from sandal carrier to general, and eventually became the 'Taiko', the highest rank a person of low birth could rise to. This series tells his story in dramatic terms with the most realistic battle scenes ever filmed for a Taiga Drama. Outstanding performances by a stellar cast make this the most sought-after Taiga Drama on DVD.