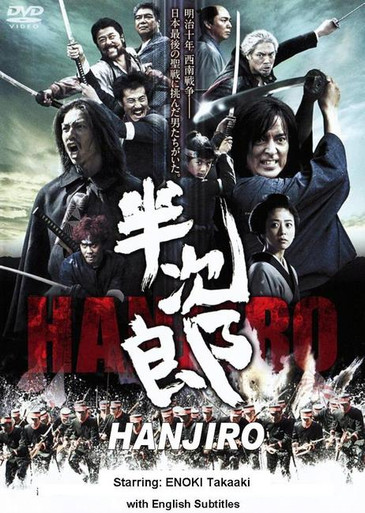 
ACTION PACKED LIFE STORY OF ONE OF THE GREAT HEROES OF THE SATSUMA REBELLION!
JAPANESE HISTORY EXPLODES ACROSS THE SCREEN!

Japanese history explodes across the screen in the life story of Nakamura Hanjiro, one of the great heroes of the Meiji Restoration.  From his earliest beginnings as a country samurai raising sweet potatoes whose exceptional sword skills impressed Saigo Takamori through his military success as Major-General Kirino Toshiaki and on to the bloody Satsuma Rebellion this exciting motion picture paints an exceptional portrait of one history’s most interesting characters.  Lead actor Enoki Takaaki a native of Kyushu (formerly Satsuma), and a skilled martial artist was the driving force behind the making of this film.  His dedication at the end of the film says it all.  This movie must be seen!