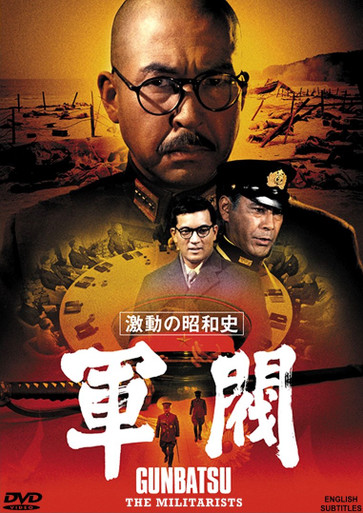 This tremendous blockbuster hit from 1970, showing the rise to power of Tojo Hideki, is perhaps the most important film to come out of Japan since the 7 Samurai! Interspersed with actual footage dating back to the 1930’s and throughout the Great Pacific War it shows in exciting detail the early successes and ultimate failure of the Japanese war machine. Never before has there been a chronicle of this magnitude about the war in the Pacific Theater of Operations, rivaling Saving Private Ryan with its intense battle scenes. With a brilliant cast featuring Kobayashi Keiju as Tojo, Yamamura So as former Prime Minister Yonai, Mifune Toshiro as Admiral Yamamoto, and Kayama Yuzo as  an intrepid newspaper reporter whose articles detailing Japanese losing battles infuriates Tojo to the point of putting his life in danger! The final hour of this film features some of the most disturbing aspects of how the Japanese fought to save their nation and their honor!

Of particular note is the internecine battling between the Japanese Army and Navy. This, to people not familiar with the history of Japanese military history dates back to the samurai era when the two Western clans, Satsuma and Choshu were enemies, only joining together though the sponsorship of Sakamoto Ryoma to topple the Tokugawa. During the Meiji era Japan’s modern military, based on European models lined up with the Army mostly consisting of former samurai of the Choshu clan, while the Navy was mostly made up of Satsuma’s former samurai. Their rivalry continued unabated up to and including the “Great Pacific War.”