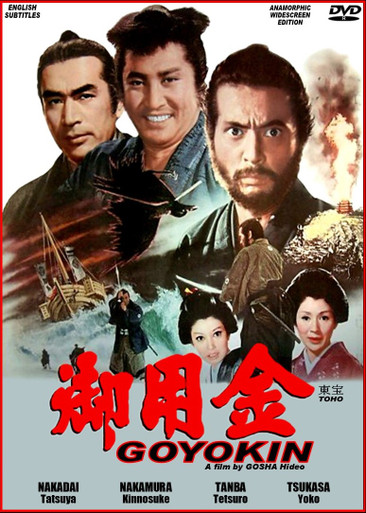 GOYOKIN (aka STEEL EDGE OF REVENGE)

and NAKAMURA Kinnosuke as FUJIMAKI Samon

One of the greatest films of all-time, Goyokin, tells the story of guilt-ridden samurai Wakizaka Magobei who returns to the site of a past massacre to seek revenge. The clan he abandoned, ruled by his former brother-in-law, plots another massacre of defenseless villagers as part of a plot to steal gold meant for the shogunate. Protecting the lone woman survivor of the previous massacre, Magobei endures a great amount of punishment to atone for the sins of his clan. Into the mix comes master swordsman Fujimaki Samon who seems to know more than he should. Originally planned as the 5th Yojimbo movie, Mifune Toshiro backed out of the project due to the extreme cold of location filming and his inability to get along with Gosha