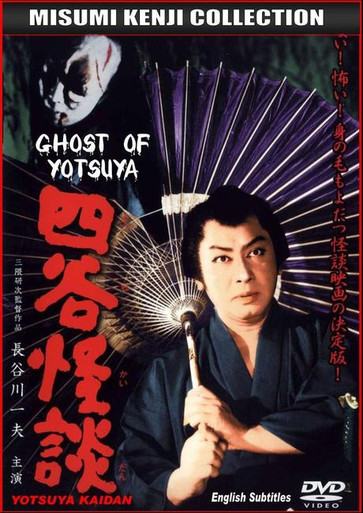 Japan's most popular ghost story has been told many times, but filmmaker Misumi Kenji puts a new twist on this old story!
A brilliant rendition of this spooky tale which is based on a famous kabuki play.

From one of Japan’s premier filmmakers comes the definitive version of the classic Ghost Of Yotsuya, a story told many times, but never before like this!  Featuring the great Hasegawa Kazuo, the biggest star of that era as Tamiya Iemon, a direct retainer of the shogun who is fooled into believing that his wife was having an affair with their servant.  Superb special effects and terrific swordplay make this film a must see! Director Misumi Kenji was well on his way to becoming the premier filmmaker at Daiei Movie Company, leading up to world renown with his rendition of the Baby Cart series of the 1970’s.