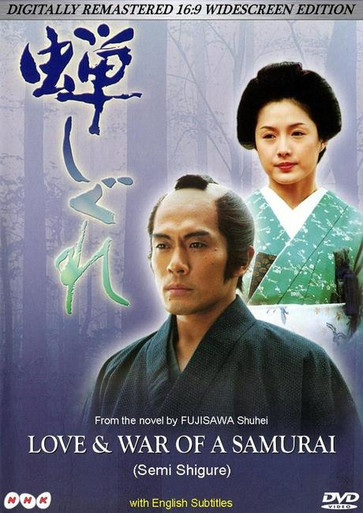 Winner of the Monte Carlo Film and Television Festival 2004 in the TV division (Golden Nymph prize).

From the novel by: FUJISAWA Shuhei

Based on a novel by Fujisawa Shuhei (author of "Twilight Samurai" and "At River's Edge") this NHK mini-series is a beautiful tale of love and honor against a backdrop of powerful swordplay. Maki Bunshiro's father was forced to commit hara-kiri after being falsely implicated in a plot to take over the clan.  As the family faced humiliation, Fuku, the girl next door was ordered to serve the lord in Edo, thus destroying any hopes they had for a future together. Despite these setbacks,

Bunshiro continued his study of fencing, and became a peerless swordsman... until he met his mortal enemy, Inukai Hyoma, a brilliant swordsman who worked  for the corrupt offical who had leveled the false accusations against Bunshiro's father.

This 7 episode mini-series is a brilliant example of Japanese television at its finest.