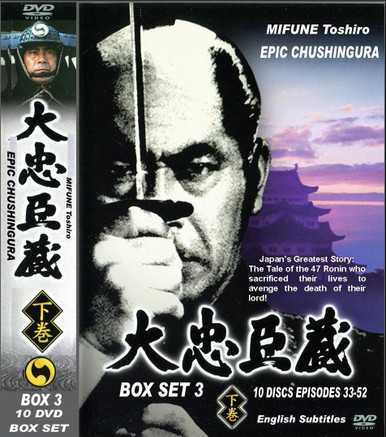 The tale of the 47 Ronin is Japan's most famous historical event, and the subject of many films and television shows.  This is the ultimate version, with each episode basically a mini-movie from the same people who made most of KUROSAWA Akira's classic films.
ON SALE FOR A LIMITED TIME!!!
Starring: MIFUNE Toshiro
TANBA Tetsuro
WATARI Tetsuya
AMACHI Shigeru
KATSU Shintaro
NAKAMURA Kinnosuke

As Oishi Kuranosuke makes plans for the vendetta, his biggest problems lie with those former members of the Ako clan who lack patience and seek to attack Kira Kozukenosuke immediately, while at the same time holding off the assassins sent by the central government.  Tension mounts while the plan is put together amid assassination attempts and other efforts to thwart the revenge sought by the remaining ronin.  As time passes, will Kira let down his guard or continue to maintain a high level of security and perhaps fortify his residence against an attack. These final 20 episodes leading up to the long sought raid bring a new excitement to samurai entertainment in a manner never before seen.  Brilliantly violent in the conclusion as Japan's history comes to life!