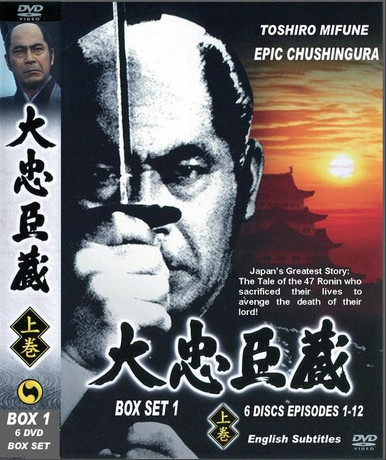 EPIC CHUSHINGURA BOX 1
(Daichushingura Episodes 1-16)
1971 - Color - 720 min. REMASTERED Academy Standard (4:3)
The first 16 episodes of the amazing yearlong series that set the standard for Japanese samurai history.
The tale of the 47 Ronin is Japan's most famous historical event, and the subject of many films and television shows.  This is the ultimate version, with each episode basically a mini-movie from the same people who made most of KUROSAWA Akira's classic films.
ON SALE FOR A LIMITED TIME!!!
Starring: MIFUNE Toshiro
TANBA Tetsuro
WATARI Tetsuya
AMACHI Shigeru
TAMURA Masakazu
NAKAMURA Kinnosuke

Episodes 1-16 introduce the main characters and sets the stage for the events to come, with the initial reason for Kira's hatred of Asano shown in a new light as things progress towards the fateful incident at Edo castle.  The year 1701 started off with a total eclipse of the sun in Japan.  A frightful and ominous beginning, to say the least...As the dispute between Lord Kira and Asano grows, it comes to a head in Edo Castle when Asano attacks Kira in the Great Pinetree Corridor.  This leads to Asano being ordered to commit ritual suicide and his clan abolished.  This judgement went against the samurai code and leads the now masterless samurai of Ako to devise a plan to wreak vengeance on Lord Kira and voice their anger at the shogunate's unfair ruling.