DUEL OF BLOOD AND SAND 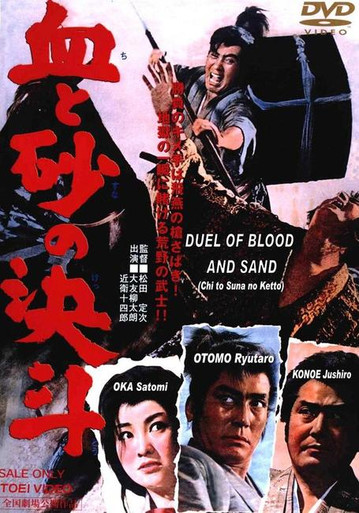 DUEL OF BLOOD AND SAND

Starring: OTOMO Ryutaro
KONOE Jushiro
Directed by: MATSUDA Sadatsugu
Frustrated with the bad behavior of his lord, Inaba Yajuro (Otomo) declares that he is leaving the clan and sets off on a journey that leads him into a small town besieged by a violent group of brigands.  In a kind of homage to Kurosawa's 7 Samurai, the townspeople have been unable to defend themselves and Inaba sets out to teach them how to stand up for themselves.  Meanwhile the vile Lord Yasumasa has sent the 4 finest swordsmen in the clan out to hunt Inaba down and kill him.  Led by the magnificent Ichibei (Konoe), a master of weaponry in his own right, everything points to an ultimate showdown between the former friends in a battle to the death.