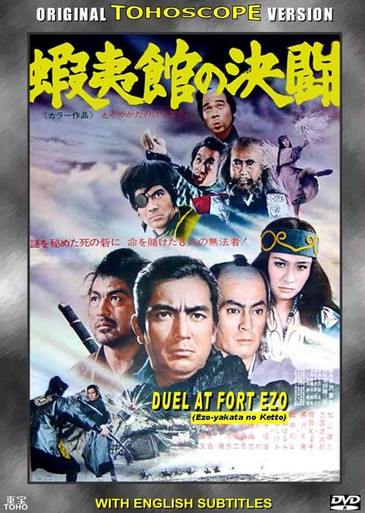 From an original story by SHIBATA Renzaburo, creator of Nemuri Kyoshiro (Son of the Black Mass aka Sleepy Eyes of Death), whose novels also gave rise to such films as Destiny’s Son and Sword Devil, this movie is a virtual tour-de-force of action and excitement.  A team of 8 swordsmen are sent to the northernmost island of Ezo (Hokkaido) to rescue a Russian princess kidnapped by the savage Ainu and held for ransom at the 300 year old Fort Ezo. The fort was originally built by Takeda Shingen and his direct descendant now leads the “Hairy Ainu” in their quest for modern weapons in order to maintain their power. Surprises abound as the team faces every kind of danger while trying to save the girl and keep the Russians from invading at the same time. The Ainu are the aboriginal people of Japan, and have many similarities to Native American fighting tactics.