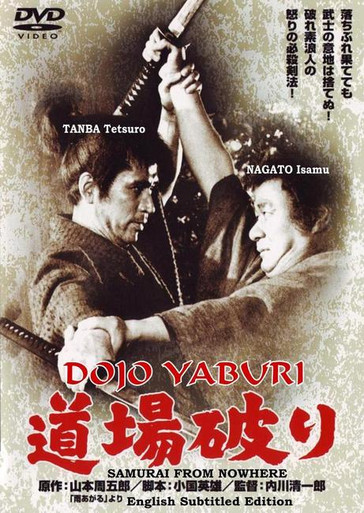 From "Ame Agaru" the same novel that gave birth to AFTER THE RAIN, comes one of the greatest samurai films of all time.  Co-starring Nagato Isamu and Tanba Tetsuro as two wandering ronin who make their living by "Dojo Yaburi" (literally Martial Arts School Breaking) where they challenge and defeat the master of a dojo so they can extort money for not telling anyone what they did.  Misawa Ihei (Nagato) is traveling with his wife who abhors the practice of sword fighting for prize money.  The ever beautiful Iwashita Shima plays Tae, the daughter of the clan's chief counselor who married the low-ranking Ihei to avoid becoming the clan lord's mistress.  Into the mix comes Oba Gunjuro, a mysterious ronin who will do anything for money.  This leads to a fitting climax as the forces of hate and love converge while the couple attempt to break through the border!