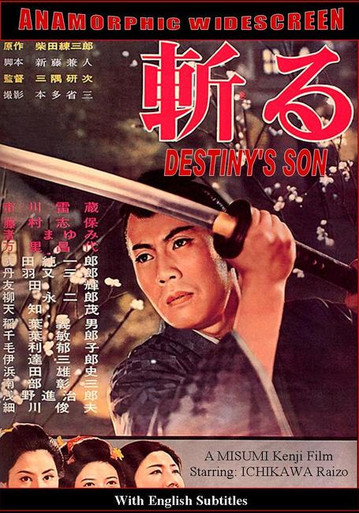 Directed by: MISUMI Kenji
Fully Subtitled theatrical trailer!
Newly re-mastered anamorphic widescreen edition, with improved translation, subtitled trailer, and photo gallery.
This film has had a major impact on Japanese films of the 1960's, as it utilized the combined talents of some of the most important figures in the samurai genre.With a screenplay by SHINDO Kaneto (ONIBABA, KURONEKO) from a novel by SHIBATA Renzaburo (creator of the Son Of The Black Mass series), this is a totally unique story. Add to that the brilliant director MISUMI Kenji and the acting talent of Japan's most popular sword star, ICHIKAWA Raizo and you have a true work of art. After a lady-in-waiting kills her lord’s mistress, she escapes and gives birth to a son. Her husband then has to behead her in a ritual suicide, and the boy becomes a master swordsman. Not knowing his past, he develops an unusual sword style, and faces countless challenges.This is considered the breakthrough film for director Misumi. He is best known in this country for directing the Baby Cart and Blind Swordsman films, but in Japan, nothing matched the popularity of Raizo and Kenji![The same year Misumi directed the first Zatoichi film, he also made this forgotten masterpiece, a rapturously beautiful evocation of the plight of fatherless men (he himself was abandoned by his parents as a child) and the futility of bushido, scripted by Kaneto Shindo from a Renzaburo Shibata novel.Shingo (Ichikawa) is the product of a scandalous affair between a guardsman and the woman he was assigned to execute. Unaware of his origins, Shingo grows up as the adopted son of a samurai family, but learns the truth upon his father's deathbed. Fatherless and masterless, he goes out into the world and finds employment with the clan lord Matsudaira to whom he devotes himself wholeheartedly. But even Shingo's superior swordsmanship can't avert Matsudaira's downfall at the hands of his enemies.Destiny's Son is a film filled with stylistic highlights: the one-take dolly shot of Ichikawa's running battle with a battalion of swordsmen under an inky sky, the labyrinth of empty castle chambers through which he attempts to find his ambushed master, the scene in which the unarmed hero defends himself with a twig of cherry blossom, and especially the recurring flashback to his mother's execution at the hands of her own lover, in a barren landscape beside a single, ancient tree.Perhaps most impressive of all, though, is the genuine doubt that speaks from the film as to the value of the warrior code and, by implication, of the samurai lifestyle as a whole. If the protagonist of Satan's Sword was merely a samurai who abused his position to give vent to his psychotic tendencies, in Destiny's Son the hero is the bushido ideal of the valorous and disciplined retainer, who, despite all his prowess with the sword and his noble heart, is powerless to prevent the deaths of those around him.]