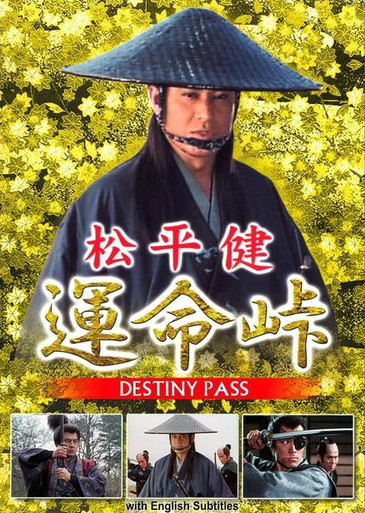 DESTINY PASS(Unmei Toge)Courtesy of IchibanStarring: MATSUDAIRA KenNATSUYAGI Isao From a story by: SHIBATA Renzaburo1993 - color - Fuji TV - 144 min. - Academy Standard (4:3)
With an all-star cast led by Matsudaira Ken and Natsuyagi Isao, this exciting tale set in the aftermath of the fall of  Osaka Castle tells the story of the last of the Toyotomi heirs in his quest for revenge against the Tokugawa. Hidenari, the son of Hideyori and grandson of Hideyoshi is smuggled to safety after his hideout is discovered. Bringing together many of the most renowned  historical figures from that era, including Hattori Hanzo, Yagyu Jubei, and Miyamoto Musashi, the gathering forces of each faction strive to succeed in battle. Spectacular action sequences abound as some of the most powerful forces in Japan prepare to meet on the field of battle! Original story by Shibata Renzaburo.