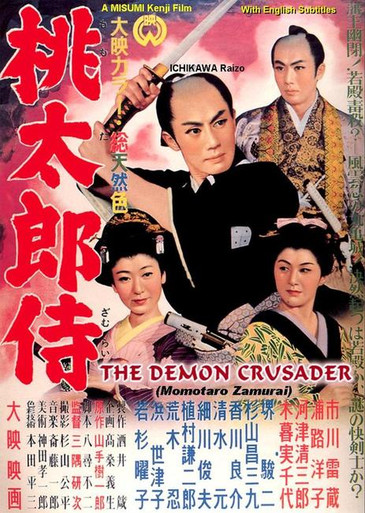 Raizo at the height of his powers!  An early masterpiece from filmmaker Misumi Kenji.
One of Japanese folklore's most popular characters is brought to life on the silver screen in this terrific version of legendary Demon slaying Peach Boy.

It's easy to see why Ichikawa Raizo was such a mega-star in this superb motion picture!

This is the original version of the traditional story of master swordsman Momotaro Zamurai in a theatrical version. Ichikawa Raizo is terrific in the double roles of ‘Demon Crusader’ (Onitaiji Momotaro) and his twin brother, Wakagi Shinnosuke, heir to the Sanuki clan. This long sought after classic from the brilliant team of Ichikawa Raizo and Misumi Kenji is one of the most charming and enjoyable movies in many years. Based on the Japanese folktale of the Peach Boy who fights evil, Momotaro bursts on the scene only to discover an evil plot by high ranking officials of his brother’s clan to usurp the succession process and install a new successor.