DEATH OF A TEA MASTER 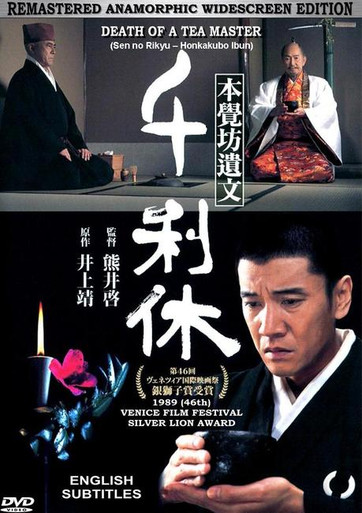 DEATH OF A TEA MASTER

DEATH OF A TEA MASTER (Sen no Rikyu – Honkakubo Ibun)

A magnificent work of Japanese cinematic art  starring Mifune Toshiro.  It tells the story of what led up to the death of Sen no Rikyu, as renowned a master of the Way of Tea as Miyamoto Musashi was master of swordsmanship.  Drawn from the pages of Japanese history!

KATO Go, and MIFUNE Toshiro as Sen no Rikyu

Together with the sword, Japanese culture rests upon the tea ceremony and the tea masters who created this remarkable tradition.  The most famous of all, and considered the Grandmaster of Tea was Sen no Rikyu, who served Toyotomi Hideyoshi, the taiko (regent) of the nation.  After holding a secret meeting with 2 other tea masters, Rikyu and the others were exiled and ordered to commit ritual suicide.  Some years later, his disciple Honkakubo (Okuda Eiji) attempts to resolve the mystery of his master's death together with Nobunaga’s younger brother Oda Urakusai (Yorozuya Kinnosuke).  And thus begins one of the greatest classics of Japanese cinema to ever hit the silver screen.

This historical drama brings to life the cornerstone of Japanese culture as they try to understand the true meaning of “The Way of Tea.”