DAREDEVIL IN THE CASTLE 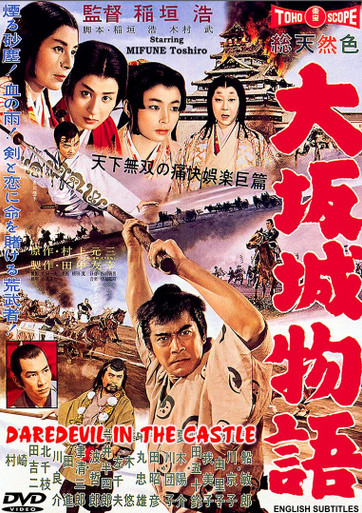 DAREDEVIL IN THE CASTLE

DAREDEVIL IN THE CASTLE (Osaka-jo Monogatari)

A world-class samurai film! An epic battle between two rival clans!Set in the impreg-nable, unsurpassed Osaka Castle! With English subtitles! Starring the legendary Mifune Toshiro in one of his greatest
roles! After losing his family in the Battle of Sekigahara, Mohei the demon, a lone country samurai, comes to Osaka. In that chaotic time, he looks for a job and is intrigued by the towering Osaka Castle. As tension rises between the rival Tokugawa and Toyotomi clans Mohei finds himself indebted to famed ninja "Mist" Saizo and tries to help the the Toyotomi, whom he had previously fought for at Sekigahara. Entrusted with the most important mission that may mean victory or defeat, he must smuggle guns that were unloaded from
a Portuguese ship onto six wagons and sneak through the invading Tokugawa army. A movie not to be missed!